The Eyes of TJ Eckleberg

In this poster, we see the eyes of TJ Eckleberg. He is peeking through the cracks of the bricks and watching over all those in the book. Although it is not blatantly stated,except for a brief comment by George Wilson, it is hinted at that the characters think that these eyes are the eyes of God. The characters create a power for these eyes, and they take on the role of the eyes of God looking down over the characters and all their wrong doings. These eyes over look the affair between Myrtle and Tom,they over look the affair between Daisy and Gatsby, and they over look the strange relationship between Jordan and Nick. The eyes, silent and observant, watch the destruction of marraige and life and never intervene. Offering little but a superstition to believe in, the eyes play a very important role in the novel. Every time the characters are in the Valley of Ashes, they feel as if their dirty affairs and inappropriate behavior is being watched, only giving the eyes more power. Through the cracks in the wall, TJ Eckleberg watches over all who walk the hall and all who live and dwell in the Valley of Ashes, scrutinizing the actions of the inhabitants of both. Of course, the eyes only hold as much meaning and power as we are willing to give them. 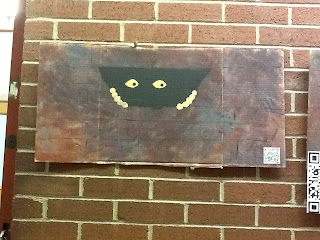